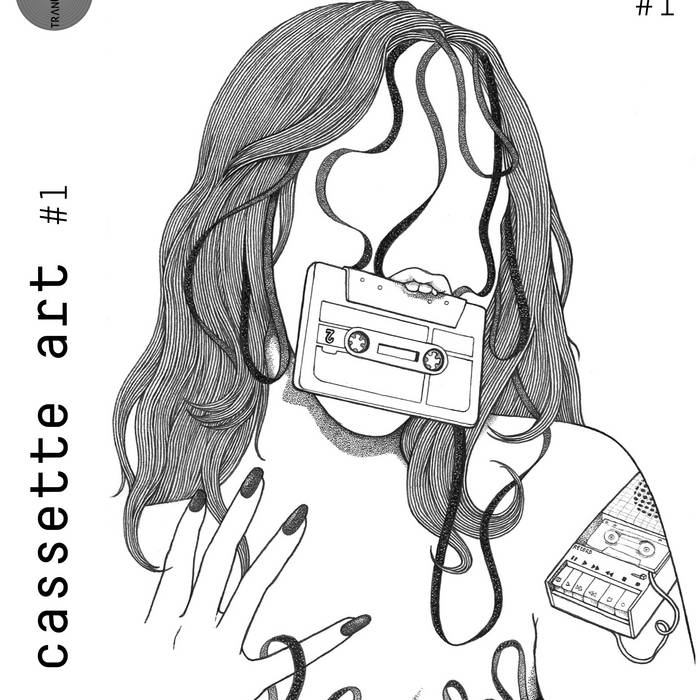 This first audio cassette (also available as digital download for those who don’t have a cassette deck) released by the Transonic label is born from an exhibition project organised first in Brussels in July 2015 at Recyclart Art Centre (as part of the NBT- City Sonic Summer sessions also supported by Transonic) and then in an augmented version, in Mons as part of City Sonic, international sound arts festival initiated by Transcultures.
The selection of this intimate Cassette Art exhibition is a mix of private archives from the 80’s (featuring cassette home productions and labels) and recent art works all based on the cassette material by Dutch composer Harold Schellinx (with his Found tapes photos and audio documents), Brussels street-cassette artist Dawamesk with his cassette sculptures and Belgian visual artist Julie Moulin who was commissioned to make the design of this cassette release.
We wanted to give visibility to this seething cassette culture which has inspired so many artists back in the 80’s till today. The analog nature of this now obsolete medium, the warmth of the hiss, the value and posture of the limited underground production, the intimacy of the home recording, the craft of the design and packaging, the alternative artistic network (thanks to the good old post) and exchanges it has woven all over the world…it seemed even more important in our global hyperindustrial and conformist world to pay tribute to the fragile but still powerful audio cassette.
This first volume of Cassette Art features artists which participated to the City Sonic ongoing adventure (Maurice Charles JJ who initiated the first cassette exhibition in Brussels, Christophe Bailleau, Marc Parazon aka such, Gauthier Keyaerts, Eric Therer with whom I’ve collaborated for our & stuff cassette-guitar-spoken word performance…), others who are close to its spirit (Midori Hirano, Felicia Atkinson, Julien Dumoulin) and pioneers such as Hal McGee aka Dog As Master (who initiated in 1984, with Debbie Jaffe aka Master Slave Relationship, the seminal Cause And Effect cassette label, then based in Indianapolis and now runs haltapes.com, an impressive cassette collection of homemade experimental music from the 1980s to the 2000s).
A part of these original tracks are live and improvised (the livetape side); another part is more cinematic and ambient (the tapescape side).
This Cassette Art sound material also constitutes the soundtrack of the eponymous City Sonic exhibition.
We’d like to thank again all the contributors who make it possible.
Let’s hope this will contribute to (re)discover the rebellious relevance and inventive freedom of this cassette art & culture, and to inspire future creative independent collaborations.

Transonic is a independent label dedicated to electronic, organic, poetic music... and other sounds.

Bandcamp Daily  your guide to the world of Bandcamp

Interviews With Butcher Brown and Slauson Malone, plus LP of the week by SAULT.